I never have experienced in my life the feeling of being totally clear headed. You know, the state of being where there absolutely an extinction of thought, emotion or sensations? I like to describe my state of mind more often than not, half being a hamster nonstop on a wheel and the contrast being a raven high up in the trees. The hamster is the yang and lit on fire just trying to complete its task… yet it’s just spinning its wheels. The raven is laughing and chuckling to itself as its respective Self isn’t able to sit still and be its own observer.

I’ve lived my entire life with chronic and severe mental health disorders, primarily on the spectrum of non-verbal learning & mood disorders. There was never a time in my life where I felt my brain was the same as someone else’s and let alone feeling a sense of belonging with others. This slowly began to change when I found the community, discipline and lifestyle that was associated as “Yoga.” The mental effects of being part of this unified and universally connected lifestyle has provided me a platform to step onto and begin healing my Self.

I wondered to myself, where in my daily life and atmosphere can I be where I get to learn, understand and apply life lessons to who I am? Yoga for me was NEVER ASANA DRIVEN, it was for my anxiety, PTSD, OCD and depression and to find like-minded spirits to connect whole heartedly with. I never had a purpose to wake up every morning when I was growing up… everything felt hopeless and without any clarity of where it was directing me on my path for making a difference in this universe. I wasn’t able to compose myself around other people without feeling extreme fear or self-consciousness of my body, image, mind and sense of worth/importance.

When I found my place in this community, I was able to witness the shifts and expansions of my own cognitive health… Yoga was beginning to allow me a sense of freedom where I could process my deepest traumas and insecurities. Yoga provided me the gateway to self-love and therefore being able to walk the path to finding my peers, teachers, mentors and everything between. Through these last 8 years, I’ve always been able to come back to Yoga as a practice, an endless self-educational portal where I could explore kinaesthetically, visually, verbally and integrate absolutely anything I desired to feel met where I was. I have grown to love and accept myself and hold space for other’s to do the same, I want to encourage and inspire other’s living with Mental Health to speak out and make a difference in other’s.

I take a strong and proud stance amongst my community here in Vancouver and advocate for the exposure and support of other Men living with Mental Health. My dream in the future is to be able to provide services in the framework of yoga, meditation and mindfulness specifically towards other Gay, Bisexual and Transexual Men. I never had this as an outlet growing up as a kid and I feel more than ever now I can make universal differences through my resources and voice as a Gay Man and a yoga teacher in this lifetime.

This is my (Men)Tality: A State of Being. 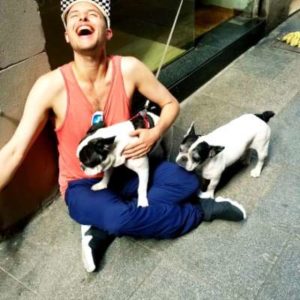 Hiiro Prince, a teacher whom believes in breaking beyond the physical boundaries of the mat, Hiiro provides his students the freedom to take their practices to where they need it to be. He encourages open dialogue and story-sharing, offers his students tangible takeaway tools to apply with off their mat, with the practical purpose of self care. He gives the gift of the 8 limbs from his heart, space for awareness and compassion and a foundation on which their inward and eternal journey can grow.

He takes pride for the health of Gay/Bi/Trans Men and wants to support through Yoga and Wellness!