In memory of Riley Rae Dennehy

At each Victoria Yoga Conference, The Kelty Patrick Dennehy Foundation presents a scholarship of $1,000 CDN to a yoga teacher who wishes to further their training and education to make a difference through teaching. The successful applicant will demonstrate how the scholarship would enable them to use yoga to heal those dealing with grief or devastation of dreams.  The scholarship will be awarded at the 2020 Victoria Yoga Conference on Friday, February 14, 2020. 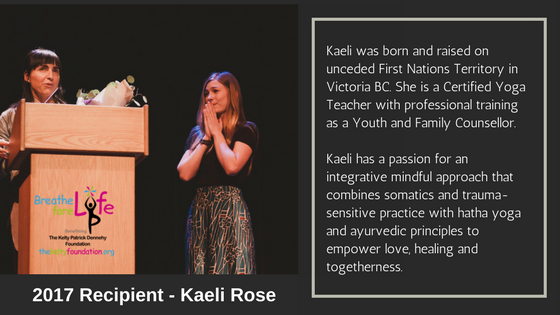 About The Kelty Patrick Dennehy Foundation

On March 2nd, 2001, Kerry and Ginny Dennehy lost their 17-year-old son, Kelty, after a short battle with depression, otherwise known as the ‘Silent Killer’. Devastated by the loss of their beautiful son and determined to prevent others from traveling the same journey, The Kelty Patrick Dennehy Foundation was founded that same year.

Tragedy hit the Dennehy family again in 2009 when they lost their daughter, Riley. When Kelty took his life, this loving and gentle soul not only lost her brother, she lost her best friend. Along with her own depression, Riley developed an eating disorder and faced challenges with alcohol as she fought the pain she carried with her.

Riley went on to graduate from the Vancouver Film School, and at age 23, she had finally found peace and solace in yoga. While traveling in Thailand to further her yoga studies, Riley died of a heart attack after taking strong medication prescribed to manage pain from a separated shoulder.

These words were so eloquently sung by her uncle at her funeral service:

“In a coffee shop in Thailand she finally got the news, the person she was looking for was standing in her shoes. She got the answer to her question; a truth for all to see what matters most is who you are and who you want to be.”

After the loss of their children, Ginny and Kerry Dennehy were even more determined to help others, and — along with the Foundation’s board of directors and a strong team of supporters and donors — they continue their journey to change how the world sees depression and fund much-needed projects and programs across the country.

Facts about depression and mental illness that cannot be ignored: